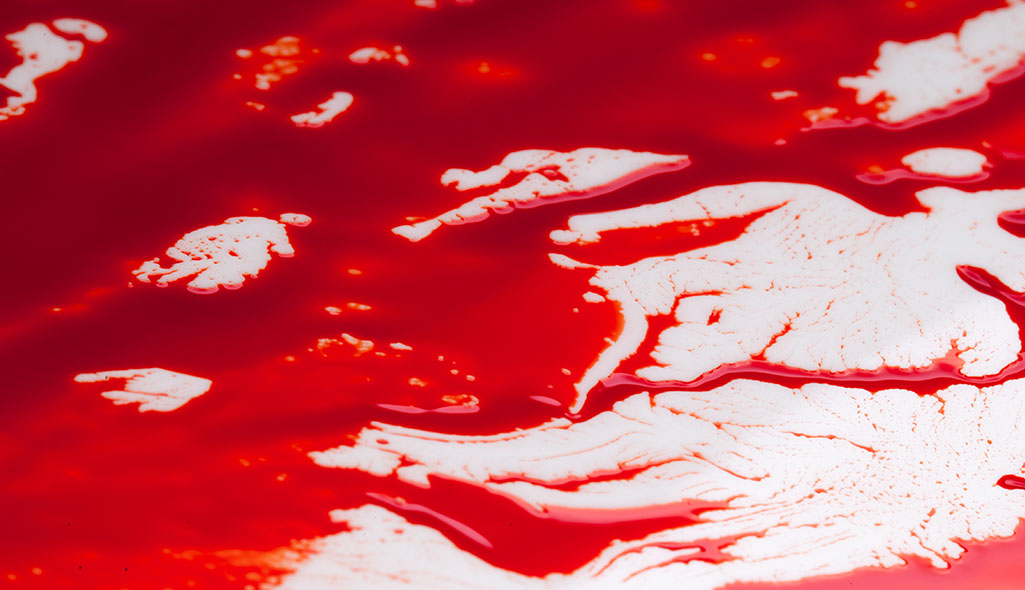 Podijeli
Ploppppp – a red droplet falls into the aluminum sink with a dull thud, forming a spot of the size of a penny, whose center is darker and the edges slightly feathered. Fascinated, Gregor Knape watches as the blood-red liquid slowly runs down his hand, condensing until it’s nearly black and slightly bulging at the point where it falls.

“I feel like I’m already in pain and I’d like to be treated for it,” the SFX artist says with a big laugh. Fortunately, medical attention won’t be necessary; the substance flowing down in such a deceptively realistic way isn’t actual blood, but a product called Supreme Blood – the newest development by Dr. Jochen Gottfriedsen in the special effects range. “We often get requests for blood that coagulates as it runs,” Gregor Knape continues. “With Supreme Blood, we’ve gotten very close to nature. As it flows, it loses speed because it loses weight. It then appears to clot; the effect is very authentic.” Head developer Yousef Atapour is visibly excited about the bloody mess in the sink. “Much of what you see in movies and on television is our work – I can recognize it immediately,” he explains with pride. “Kryolan is the largest provider of artificial blood in Europe.” Even Hollywood relies on the experts in Berlin, and this is grounded in tradition. As early as the 1950s, company founder Arnold Langer had developed a type of theatrical fake blood; before the war, he had gained experience in manufacturing it at UFA, a major German film production company. In the past, each new development in recording technology (TV & Cinema) made a new type of fake blood necessary too, as the important thing is what the camera captures, not what the actors see.

“Our bestseller to date has been Special Blood IEW,” Gregor Knape says. Around 40 tons of it were sold between 2008 and 2016 alone – a total volume that could fill up a semi trailer’s fuel tank. “Until now, it has been the most frequently used type of blood, because it’s perfect for theatrical effects and adjusted to suit old recording technologies. You can’t use it for HD; the pigments will be reflected by the harsh light of the camera, making it look opaque, like melted lipstick.” This isn’t something that just the pros notice; every viewer will immediately realize it’s fake. “All of us have an instinctive knowledge of how blood looks – it’s built into us and necessary for survival. That’s why it’s so hard to imitate,” the SFX expert explains. “To get people to flinch, feel a brief adrenaline rush, frighten them – the product has to truly be on point.”

Which properties for which blood

Kryolan has more than twenty different products, each available in several shades of red, in order to strike exactly this nerve with the viewer. Basically, a differentiation is made between external types to be applied to the skin and internal ones that can be consumed without issue. “Most types have a water base. This is often especially purified, distilled water – except for eye blood, we use sterile water from a pharmacy for that,” Yousef Atapour explains, and chemist Dr. Jochen Gottfriedsen adds: “When producing artificial blood, there are several criteria to keep in mind. First, there’s the color – for fake blood to be used internally, we’re required to use pigments or dye that are suitable for use in food in accordance with cosmetics legislation. This is very restrictive; we use carmine for this, among others. Then the viscosity is important and how the droplets form. We control how fast it flows through the ingredients we select. For instance, Supreme Blood’s base consists of a special sugar solution.” These flow properties are tested and observed on a simple pane of glass, the size of an A4 sheet of paper, which is attached to a metal bracket at a 45-degree angle and moved over to the edge of the sink into which Gregor Knape has just dripped the fake blood in such a dramatic way. “We developed Supreme Blood because we lacked a type of blood that looked like it had just come out of a body – also called ‘spray blood.’ You stab someone and the blood flows from the wound in a painterly way,” he describes. “It’s a very realistic type of blood, whereas HD Blood is aesthetically pleasing. HD Blood is likewise transparent; it was developed so that very bluish light from the camera can shine through it. That’s why it had to be pigment-free; under normal lighting, it looks much too brownish. But through HD resolution and technology, it appears real.”

Who is using blood?

To take all the requirements of the performing arts into account, there are blood bags that explode under clothing, blood capsules to be bitten into, eye blood, and blood infusions that flow easily through blood dispensers, pumps, and tubes in movie hospitals. Blood as a paste or powder, types that remain shiny after drying or others that are slightly crusted and look particularly realistic in daylight – the military and the German Red Cross order this type for operations and exercises. Special requests can also be met, of course – such as when 800 liters of blood are needed to dramatically run down the steps of a theater during the nightly performances of Nibelungen. Unsurprisingly, Yousef Atapour was capable of that feat, too, and even mastered another challenge in doing so: keeping the production costs of the blood so low that they didn’t devour the show’s budget. Small amounts (15 ml) are also sold – and there are no limits on how to use them creatively: “I did a fashion shoot in South Africa for a Kryolan campaign,” Global Head of Make-up at Kryolan Paul Merchant reports. “The look was inspired by Mother Nature. I wanted the model to appear magical and strong in my make-up design of natural shades and textures. So I used a little HD Blood on her eyelids to achieve a rich, glossy texture. It worked perfectly.”

Gregor Knape wipes the Supreme Blood off his hand with a rag and rinses the bloody cloth under running water until it’s completely clean once again. “Another advantage of our sugar base is its washability. Sugar dissolves in water no matter what state it is in,” he notes. “Even burned caramel can be dissolved completely with water; this is what accounts for the product’s washable properties. In this area, the properties have the best results by far. We’ve tested it in comparison with external brands. You can remove our Supreme Blood External without a trace with just lukewarm water and a gentle laundry detergent, such as one intended for woolens.” It must be noted here, that external blood needs to be approved as a cosmetic product and is easier to wash out. Supreme Blood Internal, on the other hand, is of food quality and therefore somewhat more difficult to wash out because of the different red dyes.

And two more aspects set realistic artificial blood apart from the real stuff: For one, the typical iron smell is missing. And it’s also sweet or contains flavorings. “IEW has a strawberry flavor because the raw materials themselves don’t taste very good, making it unpleasant to have the blood in your mouth,” Yousef Atapour notes. “But we’ve also encountered performers who either disliked or couldn’t consume that. We then asked which flavor would be better and the answer was green tea or peppermint. So I just brewed the tea in question and added the brew to the blood.” No doubt about it: Blood from Kryolan is always a truly special mixture.
prethodna objava
Podijeli
sljedeća objava